The Pastos Grandes Lithium Project currently covers over 12,619 hectares, making Millennial the most active company in this expansive salar.

An additional 299 hectares have been granted by the government of Salta. 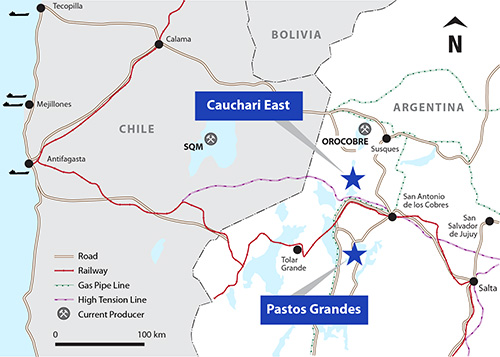 To date Millennial has invested over $40M CDN in exploration and development work at Pastos Grandes. This includes 22 completed exploration/monitoring wells, 4 pumping test production wells, pilot ponds, a pilot plant as well as a year-round camp supported by a hybrid solar power system. Millennial has completed a Feasibility Study on the project and has the potential to be in production in 3 years.

An Environmental Impact Assessment-Exploitation has been completed and submitted to the mining authority with approval expected in late 2019. To date there are no known environmental obstacles to slow down the company's aggressive timeline towards a production decision.

These results exceed our expectations in terms of brine availability and flow. We are excited to be able to advance this program to pumping trials.

Following the success of the Phase I confirmation drilling program in 2016, Millennial proceeded immediately to Phase II – resource estimation. Drilling to date includes 30 core and rotary exploration holes on 22 sites, and 4 production-scale pumping test wells amounting to a total of more than 9,000 meters.

The exploratory drilling confirmed that the brine is present to far greater depths than previously believed, and was conducted with the goal of estimating a resource. The resource estimate, released in April, 2019 is outlined in the table below.

In 2018 Millennial commissioned WorleyParsons Chile S.A. to complete a Feasibility Study for the production of 24,000 Tonnes Per Year of Battery Grade lithium carbonate over a 40 year mine life.  The study was completed in July, 2019 and resulted in the following mineable reserves:

*Tonnages are rounded to the nearest thousand, totals may not sum correctly due to rounding

The economic highlights of the Feasibility Study are outlined below:

The scientific and technical information relating to the Pastos Grandes Project contained herein has been prepared and verified by Iain Scarr, AIPG CPG. #11753, Chief Operating Officer of the and a Qualified Person within the meaning of National Instrument 43-101 – Standards of Disclosure for Mineral Projects of the Canadian Securities Administrators

Corporate Presentation Fact Sheet
About Us