Millennial Lithium Corp. (ML: TSX.V) (A3N2:GR: Frankfurt) (MLNLF: OTCQB) (“Millennial” or the “Company”) is pleased to announce the results of its Feasibility Study (the "FS") for the production of Battery Grade lithium carbonate (>99.5% Li2CO3) from its Pastos Grandes Project in the province of Salta, Argentina.

The FS was prepared by WorleyParsons Chile S.A. (Worley) and Montgomery & Associates Consultores Limitada ("Montgomery") based in Santiago, Chile, a subsidiary of international hydrogeology firm E.L. Montgomery & Associates Inc. In April 2019, WorleyParsons and Jacobs' Energy, Chemicals and Resources division, two global leaders in engineering, technical and professional services, came together as a new brand – Worley. Worley has extensive experience in the design and construction of lithium brine projects in Argentina and Chile. All figures are quoted in U.S. dollars.

Farhad Abasov, President and CEO commented "We are very pleased that we have been able to advance our Pastos Grandes Project from exploration through to a completed Feasibility Study in just over two years. The results of the FS indicate that Pastos Grandes has the potential to be a robust lithium carbonate producer and be among the lower quartile of LCE costs. Millennial continues to advance the project with product development and a pilot plant is being assembled at site. Inventory is being built by increasing the volume of concentrated lithium brine in the pilot evaporation ponds. The pilot plant, engineered to produce 3 tonnes per month of LCE, will provide pilot studies to support detailed engineering estimates and product sample material for potential customers.  With a strong cash position Millennial is now confidently moving the project into the next development stage, including seeking full funding for construction.”

The economic analysis in the FS is based upon brine grades across the Company’s Proven and Probable Mineral Reserves as described later in this news release.

The total Direct Capital cost of the Project for a maximum 25 KTPY production of battery grade lithium carbonate is estimated at $351.6 million. The total initial capital cost estimate (initial Capex) is $448.2 million which includes Direct Costs and Indirect Costs. Also included are Contingency Costs of $49.8 million, based on 12.5% of the total initial capital costs. The project capex breakdown is given in Table 2 below. 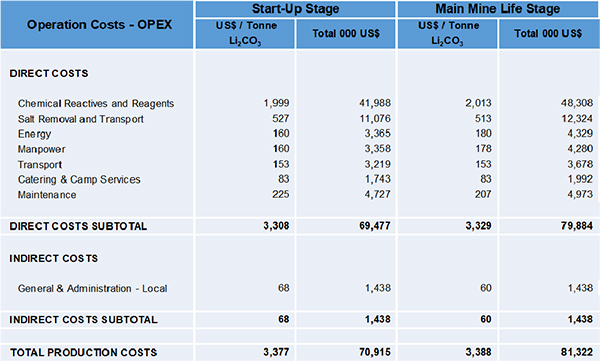 Accuracy of both CAPEX and OPEX cost estimates are expected to be within -15/+15%.

The Mineral Resources estimates for the Pastos Grandes Project were completed by Montgomery, and are outlined in the technical report “PHASE III MEASURED, INDICATED AND INFERRED LITHIUM AND POTASSIUM RESOURCE ESTIMATE PASTOS GRANDES PROJECT SALTA PROVINCE, ARGENTINA“, effective date of May 31, 2019. The lithium and potassium resources estimated in that report are outlined in Table N° 4 below.

The FS focused on lithium carbonate production and did not evaluate the potential for potash production from the Pastos Grandes Project.

Cut-off grade for brine used to calculate the resource was 300 milligrams per liter
*Tonnages are rounded to the nearest thousand
**Li Equivalency: each tonne of Li is equivalent to 5.3228 tonnes of Li2CO3
***K Equivalency: each tonne of K is equivalent to 1.907 tonnes of KCl
****The reader is cautioned that mineral resources are not mineral reserves and do not have demonstrated economic viability.

A numerical groundwater model was developed by Montgomery to support the reserve estimate and development of a 40 year production period. Total tonnages for the Mineral Reserves estimates are outlined in Table 5 and account for anticipated leakage and process losses of lithium:

*Tonnages are rounded to the nearest thousand, totals may not sum correctly due to rounding
**Li Equivalency: each tonne of Li is equivalent to 5.3228 tonnes of Li2CO3

The operation plan for the Pastos Grandes Project is based on extraction of the lithium-rich brine by a conventional well field and long-term production pumping, and proven processing techniques. Brine is pumped to the surface from up to 30 wells at an average rate of 20 liters per second (l/s) per well and directed to a series of evaporation ponds where, by crystallizing, sodium and potassium salts are removed while simultaneously concentrating the remaining lithium in the enriched brine. In addition, a facility will be provided that allows the removal of the majority of the magnesium and sulphate in the brine by precipitation by the addition of lime. When lithium concentrations reach approximately 3%, the brine will be directed to the lithium carbonate plant where remaining trace impurities including mainly magnesium, boron and calcium are further removed via solvent extraction, two phases of carbonation and ion exchange methods. This is followed by the main carbonation stage with the addition of higher concentration soda ash solution which drives the lithium precipitation as lithium carbonate. To ensure that the operation produces as pure a product as possible, Millennial has included an additional purification stage using CO2 to upgrade technical grade lithium carbonate to battery grade purity. The Company is currently not planning on producing potassium chloride at the operation. The processing facility for any production of the lithium carbonate would be done at the Project site. Technical and battery grade lithium carbonate would then be transported to a port for shipment overseas.

The production model is divided into two stages: 1) Start-Up Stage from Years 1-6 (first 6 years of production) and 2) Main Mining Stage from Years 7-40 (remaining 34 years of production). One year of commissioning predates the Start-Up Stage and a small amount of technical grade lithium carbonate production is planned. The Start-Up Stage is supported by brine flow rates totaling 480 l/s with brine supplied from 20 extraction wells pumping at different rates but focused on the higher-grade areas of the project. The average grade for the Start-Up Stage is 469 mg/l Li resulting in production of approximately 21,000 tonnes per year (TPY) of battery grade lithium carbonate equivalent (LCE). The Main Mining Stage is supported by an increase in brine flow to the ponds to 600 l/s which requires a pond expansion of 400 ha at the end of Year 6 to prepare the extra brine for processing. The Main Mining Stage is supported by 30 extraction wells each pumping between 12 l/s and 30 l/s for the remaining 33 years of the mine life. The average grade for this stage is approximately 431 mg/l Li resulting in a maximum production of up to approximately 24,000 TPY battery grade LCE. The lithium carbonate production schedule is given in table 6 below.

The data compiled in the FS forms the basis for the Discounted Cash Flow Model (the "DCFM") for the FS. The DCFM yielded the following results:

For the Economic Analysis of the Pastos Grandes Project, mine production rates as outlined in Table 6 were utilized.

The FS on the Millennial Pastos Grandes Project demonstrates attractive economics for the potential production of lithium carbonate. The Company is constructing a pilot plant at Pastos Grandes which is supported by approximately 32,500m2 of pilot evaporation ponds together with a liming plant and is projected to produce up to 3 tonnes of battery grade lithium carbonate per month. Millennial is well financed to complete this work and has a strong technical team with extensive lithium experience leading its efforts in Argentina.

In June 2019 Millennial submitted to the Environmental and Mining Authority in Salta Province, Argentina, the Environmental Impact Assessment for Construction and Operations for its Pastos Grandes Project (the “EIA”). The objectives of the EIA are to identify, prevent, minimize, correct and mitigate any potential impacts to the environment or the social framework at the Pastos Grandes Project. The Company continues to engage with the provincial mining agencies and we anticipate approval by the end of 2019.

The Company is not aware of any particular current legal, political, environmental, or other risks that are expected to materially affect the potential development of the mineral reserves. An NI 43-101 report is required to be filed, in conjunction with the disclosure of the FS in this news release, within 45 days.

The information contained in this news release relating to the FS has been compiled by the WorleyParsons, Santiago, Chile team. The technical information contained in this news release has been reviewed and approved by Marek Dworzanowski, P. Eng., B.Sc. (Hons), FSAIMM of WorleyParsons and Mike Rosko, CPG, SME Registered Number 4064687. Mr. Dworzanowski and Mr. Rosko are "Qualified Persons" as the term is defined in National Instrument 43-101 and are independent of Millennial.

To find out more about Millennial Lithium Corp. please contact Investor Relations at (604) 662-8184 or email info@millenniallithium.com.

This news release may contain certain “Forward-Looking Statements” within the meaning of the United States Private Securities Litigation Reform Act of 1995 and applicable Canadian securities laws. When used in this news release, the words “anticipate”, “believe”, “estimate”, “expect”, “target, “plan”, “forecast”, “may”, “schedule” and similar words or expressions identify forward-looking statements or information. These forward-looking statements or information may relate to future prices of commodities, accuracy of mineral or resource exploration activity, reserves or resources, regulatory or government requirements or approvals including approvals of title and mining rights or licenses, the reliability of third party information, continued access to mineral properties or infrastructure, changes in laws, rules and regulations in Argentina which may impact upon the Company or its properties or the commercial exploitation of those properties, currency risks including the exchange rate of USD$ for Cdn$, fluctuations in the market for lithium, changes in exploration costs and government royalties, export policies or taxes in Argentina and other factors or information. Such statements represent the Company’s current views with respect to future events and are necessarily based upon a number of assumptions and estimates that, while considered reasonable by the Company, are inherently subject to significant business, economic, competitive, political and social risks, contingencies and uncertainties. Many factors, both known and unknown, could cause results, performance or achievements to be materially different from the results, performance or achievements that are or may be expressed or implied by such forward-looking statements. The Company does not intend, and does not assume any obligation, to update these forward-looking statements or information to reflect changes in assumptions or changes in circumstances or any other events affections such statements and information other than as required by applicable laws, rules and regulations.